How to Escape the Central Coast (in Six Baby Steps)

If the Lake Haven epoch was ruled by the car, and my fragmented Gosford ages built upon the bus, the coming Woy Woy microlife will focus on ferries. During the two months that I hope to spend there, acclimatizing for the hop across the Hawkesbury, I must:

1 -- Cruise to Saratoga or Davistown on Central Coast Ferries (if I am too anxious for whatever reason, I can try to bail out at the first available wharf!)

2 -- Catch another catamaran to Empire Bay, the last stop on this service some 30 minutes from Woy Woy. I could then hike back to my hotel via Daleys Point and St Huberts Island, with their multimillion dollar views.

3.-- Catch a Fantasea ferry from Ettalong to Wagstaffe Wharf, en route to Palm Beach, and explore the nearby national park.

4.-- Take the same ferry once more, this time directly to Palm Beach, before returning to Woy Woy. This will be a one-hour round trip over deep water, and my first landfall on Sydney territory in nine years.

5.-- Return to Palm Beach, and then get the bus to Newport, some 10km south, where there is a hotel that I can (barely) afford.

6 -- Stay at said Newport hotel one night, to see if I can handle it..

Each cruise will be a baby step in the escape from the Central Coast, and the migration to Sydney's Northern Beaches. I have a lot of mucking about in boats to do!
Posted by Robert Sullivan at 6:39 PM No comments:

Gosford grabs you as a city on the go. All around town, construction work is carrying on. There is a wealth of heritage sandstone to be sure, and a history dating back to the convict era. Nonetheless, Gosford's eyes are framed forwards, towards a glorious future.
It is true that many buildings have fallen to the wrecking ball, including the Public School where I was stationed in the very late 1970s. Many, however, still remain. Henry Kendall Cottage was cobbled together with convict labour between 1836 and 1840 in present day West Gosford, and is now a museum open to the public. At Frederick Point you can find the graves of the pioneers hidden among the million dollar properties... (For more on Gosford and its dynamic destiny, click here.)
Posted by Robert Sullivan at 3:06 PM No comments:

On the Blink (My First Night at Hotel Gosford)

Deadset in the middle of Gosford (corner of Mann and Erina Streets) rises this historic hotel, erected in 1926. The internal elevator is just as an ancient, and is said to be a museum piece. I was somewhat skeptical on my first night here on Wednesday since the hotel is a cheapie with shared bathrooms. My concerns congealed when I realized, after checking in, that there was no remote controller for my TV. It was a steamy day, and my shirt clung to my back like a cheap shower curtain. I rummaged through all the drawers, peered under the bed, even teetered on a chair to examine the top of the clothes rack. It was a trifle dusty, but there was no controller to be found there. This could be a problem.
I rode the rickety lift two floors down to reception, where I reported my predicament. A great deal hung in the balance: this was my recon mission, and if the Hotel Gosford failed this first test, I would have to upgrade into something more expensive for the coming longstay. Thankfully, the lady at reception provided me another device, which she assured me would do the trick. I took the stairs back to my chambers, traversing some office space on the first floor. Something about the lift gave me a dodgy vibe, and I didn't completely trust it.
Returning to my room, I aimed the remote squarely at the TV, squeezed the on button. The set refused to respond, but just hung there, impassively.  Damn it, I thought.  I am not normally a complainer, but this was important. Something had to be done.

The second cheapest hotel in Gosford (the Ibis) cost at least $100 a night, or $3600 per month, I could survive without television for one night, of course, but how about the longstay (or the even longer stays which loomed beyond?) If the TV didn't work this time, what else might not work in the future? This was a dry run of the Escape from Oz which is due to begin in just a matter of months. It was a critical battle, one worth fighting for.

I was on my way downstairs again when I met a member of housekeeping on her rounds. I briefly informed her of my predicament, and she kindly accompanied me to my guestroom. After fingering the remote controller for a while, shuffling around the batteries, shooting from different angles, she surmised that the TV was on the blink. (That might, possibly, be why the remote was removed in the first place!) She promised to move me to another room, and new keys were delivered to me promptly. Five minutes later I had been transferred to a nearby wing, facing the Imperial Centre (behind the yellowed blind).

I performed a rapid once-over, just for the record. Air conditioner, check. Idiot box, working, and receiving both Newcastle and Sydney channels. Chair and table, comfortable enough. I didn't need them tonight, but I would once I started teaching here. Bar fridge, plugged in and chilled. Hopefully it was cold enough to freeze beer, but that was yet to be determined.

Checklist compiled, I went out, because I had better things to do than sit in my guestroom watching TV! I ate some cheese tteokbokki and kimchi at the local Korean restaurant, then downed a couple of Asahi Dry pints at the Bon Pavilion. Later that night, just before retiring to bed, I caught on the news that there was a big storm coming in. Luckily for me, I had Alfie's raincoat to protect me on my trip home tomorrow.
Posted by Robert Sullivan at 6:48 PM No comments:

Ded Moroz, and the Defecating Log: Christmas Around the World

One of the fascinating things about travelling and visiting new countries is learning about the colourful and unique festivals that exist out there. Now while I don't travel as much as I used to, I am able to explore the world vicariously, through my job on iTalki, and my online wanderings. It has become clear to me that Christmas is a global event, celebrated on every continent. The way it is celebrated differs starkly, however, depending on the locality. Not every country has a Santa Claus, and Santa doesn't always ride in a sleigh. In Spain the Three Wise Men deliver presents to children, which kind of makes sense, since they gifted gold, frankincense and myrrh to baby Jesus in the Bible. In Holland they have a Santa but he lives in Spain and sails to and from the Dutch homeland by boat. Go figure. Russian children send letters to Ded Moroz, a bearded old man who resides in Vologda near the North Pole, and whose name means "Father Frost". He walks with a long magic staff and sometimes rides a troika.

I believe there is a relationship between Christmas and New Year's Day in that they offer a glimmer of hope in the midst of winter. They both arrive just after the winter solstice, the most desperate time of all, but they promise that the light/sun/Son will return. It might be faint and distant, but the light is there and can be seen, twinkling through the hoary boles. The rebirth has begun... (To read my full account of how Christmas is celebrated around the world, click here.)
Posted by Robert Sullivan at 9:10 PM No comments:

Remember the One Who Left

I like music which reminds me of places that I have been, or places that I want to go. Listening to Drum&Bass I feel like I am back in London in a council flat, bass-bins throbbing, high hats crackling, the air heaving with hashish. Vietnamese love songs transport me to Mũi Né on a languid evening, waves crashing on a nearby beach, a radio crooning in a fisherman's hut. Vietnamese music always sounds so sad, it must be because they had a tragic history...

I love music's ability to rally our emotions, and take us on a journey. When I got out of my 16 days of detention in Japan, the only one who could really understand what I had been through was Jónsi Birgisson, the frontman of Icelandic quartet Sigur Rós. It didn't matter that I had never met him, it was obvious that he understood. It doesn't matter that his songs are mostly wordless, it is the emotion that counts. In fact, his music speaks of the realm beyond language which we inhabited before incarnation, and separation... (To listen to my curated playlist of music from around the world, click here.)
Posted by Robert Sullivan at 8:56 PM No comments:

Entranced by The Entrance

Established at the mouth of Tuggerah Lake, The Entrance is one of those scenic seaside towns you should see on the long road from Sydney to Brisbane. It is called The Entrance, presumably, because it sits astride the outlet of Tuggerah Lake, where the lake enters the ocean (or vice versa).


Life up here revolves around the elements: fishing, surfing, and boating are major pastimes. Every afternoon, hundreds of pelicans descend on the town for a free feed. The pelican is an emblem of the Central Coast, and you can see its likeness everywhere: as the logo of The Entrance Backpacker's Hostel, or a statue in someone's front yard.


There are actually two coastlines to explore, one on the lake, and the other on the ocean. The channel is the place they meet, where they kiss as Venetians might say. Domestic tourists abound, many from Sydney; Lebanese and Koreans are common in the summer months, and you can buy their food in the local Coles. The Red Bus service connects the town with other transport hubs, such as Tuggerah and Lake Haven. It is convenient to just jump on and off, and venture forth in search of new adventures. And there are plenty of adventures to be found, both north and south, east and west... (For more on The Entrance and its affiliated attractions, click here.) 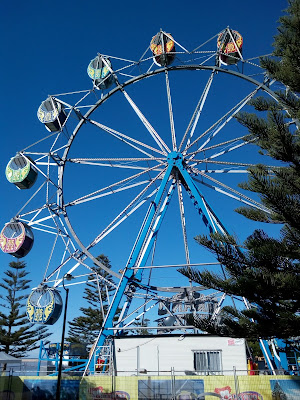 Posted by Robert Sullivan at 7:02 PM No comments:

Introducing the Schwa, the Upside Down e

There are 44 basic sounds in the English language, represented by 26 letters of the alphabet. Of these, 23 are vowels, which is quite a lot more than in some other European languages, like Spanish, or Italian.

Because of the mismatch between the number of phonemes in English and the number of letters used to represent them, there are often difficulties in trying to spell English words phonetically. This is actually one of the biggest complaints of non-native speakers when they learn English.

To overcome this problem, phonetic symbols were developed to represent the natural sounds of English in a comprehensive scientific way. The International Phonetic Association has created a system that describes the phonemes which can be used not only in English, but any language in the world (even Klingon, or Sindarin!)... (For more on the schwa and other 43 English phonemes, click here.)
Posted by Robert Sullivan at 6:58 PM No comments: